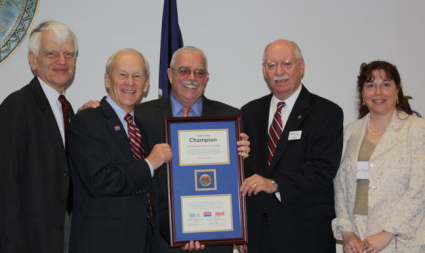 Congressman Gerry Connolly (center) is presented with a plaque naming him as an AbilityOne Congressional Champion.  Pictured left to right: George Mason University President Alan G. Merten, NISH President and CEO Bob Chamberlin, Didlake President and CEO Rex Parr and Mason LIFE Program Director Dr. Heidi J. Graff.  The award recognizes Congressman Connolly’s support for the AbilityOne Program, which provides employment opportunities for people who are blind or have other significant disabilities.
04/06/2010
Fairfax, VA – Congressman Gerry Connolly (D-VA) was recently presented the AbilityOne Congressional Champion Award for his support of the nation’s largest source of employment for people who are blind or have other significant disabilities. Connolly joins nearly 150 other Members of the House and Senate who have also been recognized for supporting people with disabilities. Bob Chamberlin, President and CEO of NISH (one of the central nonprofit agencies that facilitates the AbilityOne Program) and Didlake, Inc. President and CEO, Rex Parr presented the award on April 1 during a tour of the Mason LIFE Program on George Mason University’s Fairfax campus.
The AbilityOne Program harnesses the purchasing power of the Federal Government to buy products and services from participating community-based nonprofit agencies that are dedicated to training and employing individuals with disabilities.  This program affords Americans who are blind or who have other significant disabilities the opportunity to acquire job skills and training, receive good wages and benefits, and gain greater independence and quality of life.  Didlake, Inc. is a nonprofit agency working through the AbilityOne Program to enrich the lives of people with disabilities. More than 75% of Didlake’s nearly 1,300 employees are people with disabilities.
To be nominated as an AbilityOne Congressional Champion, Connolly had to meet several criteria categories including visiting with Didlake, Inc. representatives at his district office, touring one of Didlake’s AbilityOne contract sites in Washington, D.C., utilizing AbilityOne products in his office, and making a statement of support for the AbilityOne program.  This last step was accomplished when the Congressman entered his statement supporting Didlake and AbilityOne into the Congressional Record on March 24.
The Mason LIFE Program is an innovative post-secondary program for young adults with intellectual and developmental disabilities who desire a university experience in a supportive academic environment. Congressman Connolly was greeted by Mason LIFE students, including Darryl Gray, who was a former Didlake employee on an AbilityOne contract at the Pentagon. Upon receipt of a scholarship from the Didlake Foundation, Gray left his position to pursue an education through Mason LIFE.
Gray’s scholarship was awarded to him based in part on his extensive community work – which included volunteering on Connolly’s Congressional campaign.  Coincidentally, some of the money for Gray’s scholarship was raised by Connolly’s Chief of Staff – James Walkinshaw – who participated on the Didlake Foundation’s 2009 Marine Corps Marathon charity team.  Said Congressman Connolly, “It’s thrilling to see how programs like AbilityOne and Mason LIFE are making a difference in the lives of people who work so hard to overcome anything life throws at them. I’m proud to be connected to both of these great programs – and to have made that connection through Darryl Gray, who is the very embodiment of the programs’ ideals.”
About Didlake
Didlake, Inc. is a not-for-profit corporation headquartered in Manassas, Virginia. It was founded in 1965 to create opportunities for people with disabilities through services that connect them to employment, education and the community. It provides contract business services for commercial and government customers and has won numerous awards for its facilities maintenance; packaging/ assembly; and administrative services.  The organization operates throughout the Washington, D.C. metro area, in the Roanoke Valley and in Greater Hampton Roads.  It has approximately 1,300 employees and an annual operating budget exceeding $50 million.  Didlake, Inc. is licensed by the Commonwealth of Virginia, accredited by CARF and proudly serves the nation through the AbilityOne Program.  Its partners include the Virginia Department of Rehabilitative Services, local Community Services Boards and United Way of the National Capital Area.   For more information, go to www.didlake.org
AbilityOne Program
Providing employment opportunities to more than 45,000 people, the AbilityOne Program is the largest single source of employment for people who are blind or have other significant disabilities in the United States.  More than 600 participating nonprofit organizations employ these individuals and provide quality goods and services to the federal government at a fair market price.  The AbilityOne Program is administered by the Committee for Purchase From People Who Are Blind or Severely Disabled (www.abilityone.gov), an independent federal agency, with assistance from National Industries for the Blind (NIB) (www.nib.org) and NISH-Creating Employment Opportunities for People with Severe Disabilities (www.nish.org).
Contact:
Betty Dean
[email protected]