Anita Advances from Janitor to Supervisor at AbilityOne Contract Site 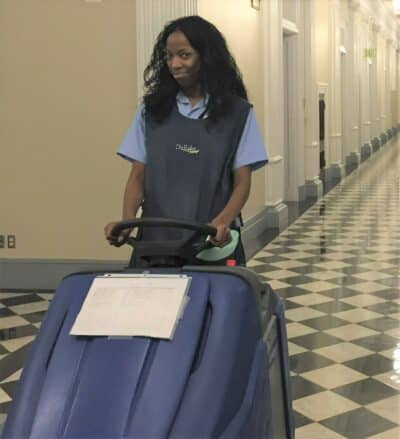 Anita has dedicated more than 11 years to providing exceptional service to customers and colleagues at a prominent General Services Administration building in Washington, D.C. During that time, she has been promoted three times into positions of increasing responsibility in support of an AbilityOne Program custodial contract.

Anita started with Didlake in 2011 as a Janitor working on the night shift. In 2014, she was promoted to Floor Equipment Operator. Customers remarked that Anita’s floors always shined and she was often referred to as “the best floor tech ever.”

“Her floors were awesome. They had a beautiful shine and lust to them. She paid attention to detail, corners and edges. If she had to get down on her hands and knees on a floor pad, she would do that. She wasn’t afraid to do anything,” said Betty Williams, Operations Manager, Didlake.

Anita was promoted again in 2016, this time to Lead Worker. She excelled in that role as well, ensuring employees had the appropriate equipment and work schedules, and consistently demonstrating she was there for employees.

In 2018, Anita was promoted to her current position as Supervisor. In this role, she trains employees to complete all assigned tasks following standard operating procedures and using CleanTelligent software for daily quality control inspections. Anita works the mid-day shift weekdays and is considered essential personnel. She reports to duty even when the government is closed.

“Anita is very dedicated to her work and the people we serve,” said Williams.

“Sometimes you have to go, go, go because of what’s going on at the site. I thought, ‘How am I going to communicate with Bryant and Argachew?’ So, I downloaded an ASL app and taught myself sign language with their help. I started remembering the basics and blossomed. I got this now; It took me about a year and a half,” Anita said.

“I like being the Supervisor. When I started as a janitor, I didn’t think I was going to be able to be a supervisor but once I got there, I love it now. I enjoy working with my coworkers and doing the schedules,” Anita said.

Anita aspires to be Project Manager someday, but noted she wants to build on her experience as a Supervisor first. Her job with Didlake allows her to support herself and her daughter.

“Since I’ve been working with Didlake, I got a car and my own place, and money to shop. I’m a single mom. I have a daughter who is 3. I love being around family, especially with my daughter, taking her places like toddler playhouses and to play outside at the playground. I want to purchase a house for me and my daughter so we can have a big yard with a playground,” said Anita.

Anita owes some of her employment success to her father, who helped her build a foundation in custodial services.

“Before coming to Didlake, I was working with my father. The majority of my family is in the custodial field. He was teaching me everything like cleaning classrooms and bathrooms, and doing floor work. He worked in schools,” Anita said.

Anita brought those skills with her to Didlake and hit the ground running, adding valuable technical, people and leadership skills during her tenure.

“She has grown with Didlake with her leadership skills and her job knowledge,” Williams said. “She has been working with different people with different types of disabilities. Every person we work with is different so training them and working with them is different. She has mastered that very well. They like her very much. The customers do as well; I never get a complaint.”