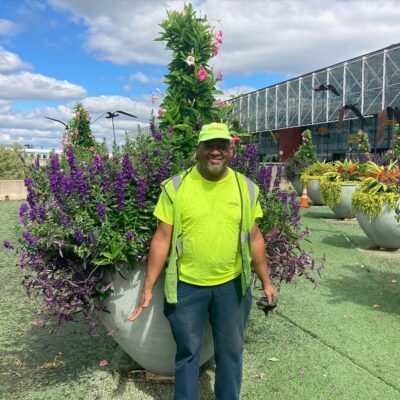 For a quarter of a century, Mikey has taken tremendous care of the plants and flower beds at Baltimore-Washington International (BWI) Thurgood Marshall Airport, having learned and mastered the art of landscaping. He is a member of Didlake’s 16-person landscaping crew that cares for flower beds throughout the airport, providing a beautiful view for travelers flying in and out of BWI. A separate Didlake crew performs grounds maintenance services.

Didlake performs both services through a Maryland Works state set-aside contract for the Maryland Aviation Administration. Didlake began work on the contract in 2013 and hired Mikey from the incumbent contractor. Altogether, Mikey has been beautifying the grounds at BWI for 25 years.

“My job has allowed me to learn a trade that I love, while also allowing me to make friends and be a part of a team,” said Mikey. “Plants are like people. They need water and air to survive just like us. When you take care of the plants like you take care of yourself, the plants will thrive.” 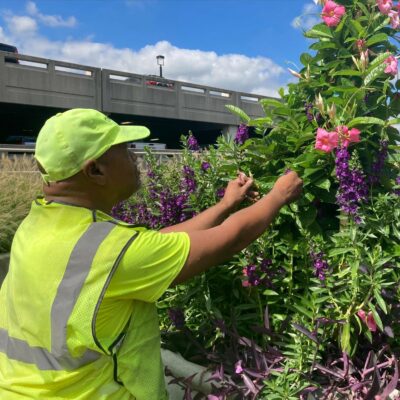 Mikey starts each day by packing coolers for his crew and others, and loading vehicles with all the tools that are needed for the day. He spends the day pulling weeds in the flower and mulch beds; mulching beds throughout the airport; and dead heading plants such as knockout roses, geraniums, day lilies and oak leaf hydrangeas. He also removes old plant material, preps beds for new plants, and plants perennial and annual flowers. Mikey and his crewmates plant over 10,000 flowers every spring and 5,000 in the fall. Mikey is always looking out for his team, making sure everyone is hydrated and prepared for the tasks ahead of them, including some jobs that are physically demanding.

Mikey knows about a lot of different plant species and knows what time of year to cut each plant. He knows which weeds should be pulled and which ones should be left alone as native species.

“Everything is second nature to him since he’s done this for so many years. Mikey is eager to work and always has a smile on his face. It doesn’t matter how hard the task is, he never complains; and he rarely misses a day of work. He helps motivate the team at BWI, where there is a lot of work to be done. He’s a hard-worker – he is the rock and soul of the team,” said Mikey’s supervisor, Adam Chorney, Didlake Project Manager.

In honor of his exceptional work, Didlake nominated him for Maryland Works’ Employee of the Year Award. Additionally, Didlake twice honored Mikey with its Award of Excellence, which is given to employees who go above and beyond the call of duty. Mikey was specifically recognized for enhancing team morale by giving positive reinforcements and leading the charge to complete any assigned work task.