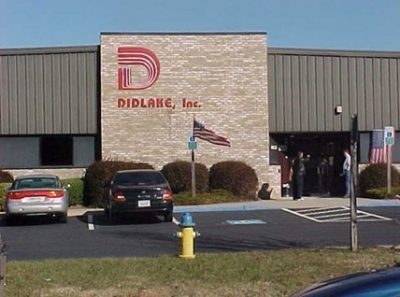 On June 1, Didlake demolished its longtime headquarters building at 8621 Breeden Avenue, marking the end of an era for the Manassas-based nonprofit and making room for a new 44,000 sq. ft. three-story consolidated headquarters.

In addition to the symbolical significance, the new headquarters will allow Didlake to consolidate its Northern Virginia team members in the new building and adjacent office at 8641 Breeden Avenue, Didlake’s current headquarters. Didlake team members in Northern Virginia are currently scattered across several locations, including in rented office space. Didlake will continue to operate administrative offices in Baltimore, Md. and Greater Hampton Roads, Va.

The new headquarters campus will also be home to an expanded Day Support Program.

“We will have program and office space in the same building. All of us are really looking forward to that – to be able to be a part of the programmatic side,” said Denée McKnight, Vice President of Finance and Administration/CFO, Didlake.

Lyn Tribbey, Purchasing Director, Didlake, agreed. Tribbey managed the mailroom in the original headquarters for many years. “It was a wide-open environment. There were several groups in the building, including CIP (Community Inclusion Program; now our Day Support Program) and sheltered work, and we would work together. Customers would bring in mail and we’d stuff and sort it. Our team in Northern Virginia is all spread out now; I’m looking forward to bringing us back together. It’s going to be sad to see the building torn down, but tearing down a building isn’t going to tear down any of our memories. We’re always going to have those.”

Construction of the new building will begin immediately and is expected to be completed in 2022. Didlake selected Mike Garcia Construction, a local, family-owned and operated company, for the project.

“They built the building we’re sitting in at 8641. We thought it was a perfect partnership since they know us; they know the land – they also built the townhouses next to us; they know Manassas and they are very well known here. We already have a trust built with them,” McKnight said.

That trust goes both ways. “Everyone has to have faith and trust in one another to be able to start a project and get answers to questions and solve problems all the way through the build. There has to be accessibility throughout the process and they respond very well. Didlake puts so much into what they do. They run a good operation and we love working for them,” said Mike Garcia, Owner/President, Mike Garcia Construction.

With concrete construction and quality materials, the new building will be what the construction company refers to as a “100-year building” that is designed based on strength, durability and safety. With composite walls and a functional design that allows for flexibility in rearranging floorplans in the future, Didlake anticipates the new building will meet its needs for many years to come. The building will have sustainable features such as locally sourced materials, recycled materials and very high insulation values. The HVAC system will include bipolar ionization, which purifies the air as it is circulated and protects against many airborne allergens and viruses. Touchless devices in restrooms will also help reduce the spread of germs.

“In response to COVID, everyone started looking at what they could do to purify the air. These are all things that are tried and true devices and techniques that will make it a healthier building all around. When the flu gets really bad, this building will be a good place to be,” said Jean Brouillette, Commercial Project Manager, who was also the superintendent for the construction of Didlake’s current headquarters building 20 years ago.

“They have been a very good partner,” Brouillette said. “When the pandemic came, Didlake opened the building back up to use as a food warehouse. That just shows the spirit of the Didlake people and their commitment to the community.”

Both buildings will sit on Didlake’s 4.9-acre lot, which is composed of three parcels of land. One parcel of land, east of 8621 Breeden, was donated to Didlake in 2015 by the I.J. and Hilda M. Breeden Foundation, which has a long history of commitment to the Manassas community and to Didlake’s mission of enriching the lives of people with disabilities. The foundation also established Didlake’s original presence on Breeden Avenue by donating the land at 8621 in 1984. In 2018, Didlake purchased the land that remained between its property and the Best Western. The purchase of the property included an in-kind donation from a family in Manassas.

“We’re happy to be part of Didlake’s journey. We’re happy that they know they can always call on us for any of their facilities, for any repairs; we’re going to be there for them,” Garcia said.

Demo day was a long time coming. In fact, it’s been in the works since 2013, around the time when McKnight joined the company. Soon after she joined Didlake, the building was emptied and preparations began to tear it down. The first delay came when Didlake decided to conduct a feasibility study to ensure the building needed to be torn down completely rather than reinforced and enlarged. Didlake confirmed demo was the best path forward and resumed preparations.

“We believe that anything that can be used by anyone else should be so we wanted to see what we could sell or giveaway,” McKnight said. She called in Tank Farm and Restore to take things they could repurpose, like heavy metal, doors, light switches and building materials.

As the donation process commenced, Didlake secured a contract to provide custodial services for 60 Prince William County municipal buildings and needed a storage facility. Demolition efforts paused once again and the building became an equipment and supply storage facility, as well as a custodian training area. When that contract concluded a year or so later, demolition planning began once again.

Early in 2020, Didlake sent a letter notifying the city of Manassas of its plans to move forward with the demo. The next day, Didlake received a call from ACTION in Community Through Service (ACTS) of Prince William County, requesting to use the building for Prince William Food Rescue to mobilize volunteers and pack meals for people in need. Didlake withdrew its shutdown letter; Prince William Food Rescue quickly moved into Didlake’s building and used it until it secured a new facility about five months later.

“With the pandemic, the county asked us to launch the community feeding task force. We used our [Food Rescue Hero] app to support 78 distribution sites throughout the county and bulk redistribution through USDA’s Farmers to Families Program, but needed a large space to make that happen. Didlake gave us their space to use while the county identified a warehouse for us,” said Aaron Tolson, CEO, Prince William Food Rescue. “We couldn’t have gotten started when we did without Didlake’s help.”

Then the next call came: Capt. Joseph Rose of Manassas Fire and Rescue heard about the pending demolition and wanted to use the building for training exercises.

“When buildings get demolished, it affords us an opportunity to do training that we don’t get to do on a regular basis,” Rose said.

With various permits and insurance in place, for the last several weeks, the department conducted hands-on, real-world simulation training with its rescue crew. With a smoke machine – like a party fogger – the rescuers practiced searching for people in a building filled with smoke. They used the large warehouse in the back of the building to conduct a large-area search with stretched hose lines. In the building’s final week, rescuers practiced breaching interior walls to complete a rescue in another room. They even cut holes in the roof to practice ventilating a rooftop.

“Operations on most structure fires require ventilation to assist with extinguishment efforts. Many times, we will ventilate the fire by cutting holes in the roof. It’s a lot more work to get the roof opened up on a commercial building compared to a residential house. We don’t get the opportunity to do that simulation very often so anytime we get the opportunity, we do it.”

“With the pandemic and everything going on, we were looking – just like a lot of people and companies – for ways we could help. With both Prince William Food Rescue and the fire department, we really wanted to make it happen. We were going to find a way to make it work to help our community,” said McKnight. “I call the building the Phoenix. It does not want to die. It just wants to rise again and rise again.”

The fire department continued training exercises right up until demo day. “The Phoenix” completed many missions in its 33 years. With its work finally done, a new building will soon take its place, giving Didlake room to grow.

“We have a longstanding history in the City of Manassas and look forward to being a part of Manassas for many years to come in our new consolidated headquarters campus that will give us more capacity to serve people with disabilities in Prince William County and surrounding areas,” said Erika Spalding, Vice President of Corporate Communications and Marketing, Didlake.