Throughout October, Didlake will join the nation in commemorating the 75th annual National Disability Employment Awareness Month (NDEAM). For Didlake, it’s always about increasing access and opportunity. NDEAM is every day. See how landmark legislations over the years has opened doors for people with disabilities with federal contracts and how you can increase opportunities in the workplace too! 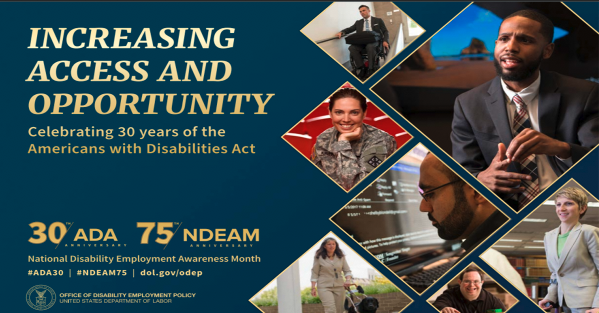 Throughout October, Didlake will join the nation in commemorating the 75th annual National Disability Employment Awareness Month (NDEAM). Held each October and led by the U.S. Department of Labor’s Office of Disability Employment Policy (ODEP), NDEAM is dedicated to celebrating the contributions by people with disabilities to the workforce and to raising awareness of disability employment issues.

NDEAM also is the culmination of ODEP’s yearlong celebration of the Americans with Disabilities Act (ADA), which turned 30 on July 26. ODEP is celebrating both milestones with its “Increasing Access and Opportunity” themed campaign, including its annual NDEAM poster.

The History of NDEAM

NDEAM dates back to 1945, when Congress enacted a law declaring the first week in October each year as “National Employ the Physically Handicapped Week.” In 1962, the word “physically” was removed to acknowledge the contributions and employment needs of individuals with all types of disabilities. In 1988, Congress expanded the week to a month and renamed it NDEAM.

Signed into law by President George H.W. Bush, the ADA is designed to ensure a more inclusive America, where every person has the right to participate in all aspects of society, including employment. Modeled on the Civil Rights Act of 1964 and the Rehabilitation Act of 1973, the ADA is the most comprehensive disability rights legislation in history. Title I of the ADA requires employers to provide reasonable accommodations for applicants and employees with disabilities, and prohibits discrimination on the basis of disability in all aspects of employment.

Didlake: Then and Now

“As we celebrate these milestones and remind employers of the many benefits of having a disability-inclusive work culture, I also want to take a minute to celebrate and reflect on our long history of enriching the lives of people with disabilities,” said Donna Hollis, Didlake Chief Executive Officer (CEO). Hollis, who has worked for Didlake for a quarter of a century, took the helm officially in February 2018 after serving as acting CEO for nearly two years.

Didlake got its start in 1965 when a group of Manassas residents recognized the need to increase access and opportunity for children with disabilities. They created the Didlake School, which was later reimagined as Didlake Occupational Center shortly after Congress opened up access to special education at public schools through the 1974 Education for All Handicapped Children Act. The new Didlake supported 16 former students, then beyond school age, in achieving employment success at Didlake’s mailing business. As Didlake developed partnerships in the community in the 1980s, some individuals shifted to work in community placements while others preferred the supportive work environment at the mail center.

“Throughout the decades, Didlake has always been proactive, not reactive, to societal changes,” said Lynda McPherson, Didlake’s Business Process Analyst, who has been with the organization for some 25 years. “We have a very extensive strategic planning process that includes an environmental scan. We look at how government, economics and social policy are impacting us and determine how to stay ahead of the curve,” McPherson said. Didlake emphasized accessibility and diverse work long before there was legislative or societal pressure to do so. More recent examples include the opening of Didlake’s UPS Stores and Didlake’s participation in Project SEARCH, an internship program for students with disabilities to work in community settings such as hospitals and a resort.

In the early 1990s, as ADA went into effect, Didlake began work on its first federal contracts through the AbilityOne Program. Susie Kennedy, Employee and Labor Relations Manager who joined the Didlake team in 1996, described Didlake as “a mom and pop organization with a limited number of federal contracts” and recalled the challenges of dial-up internet and telephone-only communications. At the time, Didlake had about 275 employees in a corporate building, sheltered workshop and at four contract sites.

“As we expand, we work closely with our customers to make sure the buildings are accessible and with our on-site staff to make sure they have the tools they need to support people with disabilities. We take a proactive approach to make sure people are aware of the types of accommodations available,” Kennedy said.

Kennedy and Anil Emmatty, Program Manager, reflected on some of the organization’s first AbilityOne Program contracts – most of which continue today. Emmatty joined Didlake in 1995 and worked on-site at the Pentagon, supporting Didlake’s custodial services team. The team initially cleaned three of the building’s five floors; a fourth floor was later added and the scope of work gradually increased.

Emmatty, who was in the Pentagon with his team during the terrorist attack on September 11, 2001, recalled, “Ten people returned the very next day and most shortly thereafter. I think it’s really remarkable how they wanted to come back and do their jobs.” Emmatty noted that the team showed similar dedication during the anthrax attacks that followed a few weeks later and the D.C. sniper attacks in 2002. “They did a great job adapting to change and doing their jobs,” he said.

Didlake’s team at the Pentagon and other federal sites have risen to the occasion once again during the COVID-19 pandemic, increasing the frequency and thoroughness of cleaning and disinfecting where needed. With heightened safety protocols, including increased use of personal protective equipment, people with disabilities are once again “keeping the country’s critical services in operation,” Emmatty said. “They are ensuring these locations remain safe and operational during the pandemic.”

Stacey works as a custodian on another AbilityOne contract that dates back to the early 1990s – custodial services for the Army National Guard in Arlington, Va. Stacey, who has been employed by Didlake for more than 25 years, exemplifies the spirit of Didlake’s mission.

“Stacey’s work at the National Guard not only performs a vital service for our customer, but also helps her develop invaluable personal and professional skills that her co-workers see and appreciate,” says Donna Clements, employment specialist at Didlake. “Her communication skills continue to improve, and she enjoys being around her co-workers and coaches every day.”

Stacey recently purchased a cell phone, which she’s been using daily to ask questions and let her family and employers know about changes to her schedule or transportation – variations that may have previously been hard for her to communicate to her support team. Meanwhile, she says she has learned to manage her anxiety and communicate better with those around her.

“She laughs and talks more to the tenants and other employees,” said her Didlake supervisor, Juan “Carlos” Campusano.  “She’s ready to become even more independent and vary her routine.”

Her family reports a big difference in Stacey since she began working and receiving support from her team. When asked what she likes most about her job, Stacey responded, “My equipment, routine and friends.” 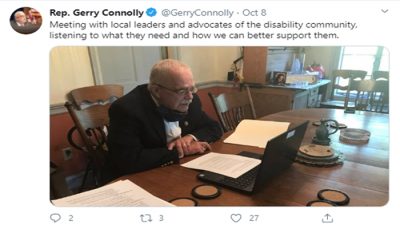 “For Didlake, it’s always about increasing access and opportunity,” said Rachel Payne, Vice President of Advocacy and Public Policy. “NDEAM is every day. We still celebrate and bring awareness every October because there is a need to inform and educate the community about what it means to hire a person with a disability. Disability is just a natural part of the human experience. One in four people in the U.S. is living with a disability, and as we age, our chance of acquiring a disability increases.”

NDEAM is an opportune time to recognize Stacey and all individuals with disabilities employed by Didlake or supported by its programs. It’s also a time to collaborate with community members, local businesses and legislators to further Didlake’s mission and effect change. To that end, Didlake participated in or will participate in the following events this month:

How Can You Create Opportunities in the Workplace?

There are a variety of ways you can support Didlake’s mission during NDEAM and throughout the year. Need talent or contract services? Contact Didlake to assess if we’re a match. Shipping holiday packages or buying stamps? Visit Didlake’s Manassas UPS Store or Woodbridge UPS Store. Tired of having old photos and papers clutter your office? Consider going paperless with Didlake Imaging’s document scanning services. 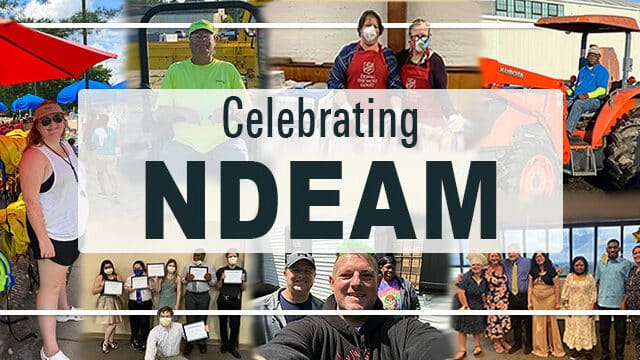